Hello peoples!
It's been a while since I did a Photoshop tutorial.
In this tut, I'm gonna be showing you how to make soft, falling shadows. It's may seem like a strange technique, but with explanation it's going to make a lot of sense.
So, let's get started! (if you find the images are too small, you can click to view the larger original version)

STEP 2: START THE EFFECT
To start, we're going to apply Motion Blur. First off, I want my shadows to drop to the bottom-right (5-o'clock). Which is why I set my gradient overlay to 95 degrees.
But, it's not going to be to the text layer (obviously), so I'm going to duplicate (Ctrl+J) and take the bottom copy. Right-click > Clear Layer Style. Then I'll head into the text tool and change the color to black.
Now I have the shadow layer. 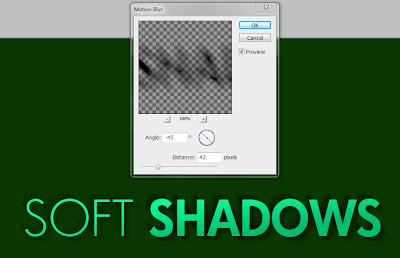 OK!
Now, the first problem is obviously that the shadow looks weird, because it's started to stretch to either side of the text. But that's okay. You'll also notice that it produces a sort of 'etched' look, like the text is cut into the background. With a bit of editing we can probably emulate that, but I digress.
Once we've clicked OK, we'll reposition the text so that the top-left edge of the black is touching the top-left edge of the text (I hope that makes sense):

Okay, so far so good.
That step is essentially the basis of this effect. We just use the Gradient Overlay to add to that sense of depth and perception. But we're not done yet, we need to darken the shadow!

STEP 3: GIVE OPACITY
The reason our shadow is so faint is because they have alpha or transparency, even though our original layer was solid. This is because of the Motion Blur effect. It doesn't actually create pixels, it just messes up the ones that are already there (so I believe).
The thing is, there is no way of directly increasing the opacity of pixels (at least not that I know of), so there's two techniques I devised to do this as I progressed over the years. You probably have your own. If so, use it, if not, I'll show you one of the techniques to do this:

So, in the Layers pallet, hold Ctrl and click on the thumbnail of the shadows layer. This will select the layer:

It may look strange, but what's actually happening is that only the parts of the layer that are more than 50% opacity are shown selected. So you can see the F and T are barely visible. This is mainly because the text is also thin.
So, let's hit Alt+Delete three times to fill the selection with the foreground color (if it's not black, press D to reset the colors). Non-shortcut people can go Edit > Fill and choose Black then click OK... three times...:

Now head over to Select > Deselect (Ctrl+D) to see what we've done:

Looks a lot better now that it's darker. Some of the fainter pixels are now visible on the other side, but this is easily fixed by just moving the layer again with the arrow keys.
But we're not done yet, we still need to:

STEP 4: GIVE SOFT SHADOW LOOK
Soft shadows have... well... soft edges. So, we can head over to Filter > Motion Blur (Ctrl+F) which repeats the last filter applied, and reposition the shadow again using the arrow keys.
It already looks pretty good, but just to be sure, we can apply Gaussian Blur of about 1 pixel just to add that slight softness.
When that's done we have this:

We can then tweak the Layer Style (Gradient Overlay) and even add more to add that sense of depth, but I'll leave that to you when you:

STEP 5: EXPERIMENT!
There's nothing I love to do more than experiment after a tutorial. Go ahead and try different styles. Try add elements that would make the image more interesting and believable. Heck, even try the techniques from the button tutorial and see what you can make:

In this case, I've tweaked the gradient overlay, added Inner Glow and Bevel. Add a vignette to your image and you're all set! 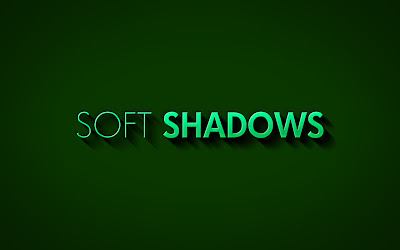 What do you think? Any problems with the tut? Any discoveries or suggestions?
Drop a comment below, or like and comment on the Facebook page. I'll be sure to get back to you :-D