There's lots of reasons why you'd probably want to do this! For example, applying tracking data, but I think the most relevant reason would be to have more control over the position of the emitter.

If you've used Particular, you'd know there's lots of options of emitters (Layers, Lights and so on), but CC PW doesn't. In fact, it's values for the Producer's position are not in 3D space like everything else, but rather are relative values from the centre of PW!

Don't ask me to break this down because I really don't understand what's going on. All I know is, it works!

If you're having trouble copy-pasting this all the time, or have no clue how to set up expressions, you could save it as a preset (Animation > Save Animation Preset...) or you could download the preset by clicking on the image below:

(on MediaFire)
If this is your first time downloading from i2c, please read this (legal stuff) 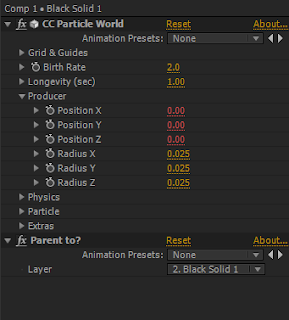 Copy the file to Libraries > Documents > Adobe > Adobe After Effects CS5 > User Presets
May not work in older versions of AE.

The preset has an added Layer Control named "Parent to?" that lets you choose the layer the producer should follow.
It also has all the Grids & Guides already switched off.

If you're having trouble with expressions, don't forget you can download the After Effects Expressions Basics from this post for free. Don't forget to drop by and leave a comment on what you thought of it.

That's it for now. See you soon with yet another preset XD